I can run fast?

I must admit I had another post written and ready for today, but then I realized how amazing speed training was last night. And that, folks, is worth bragging about.

When I walked out of the office, clad in my Nike running shorts and short sleeve tech tee, I was shocked at how cool it was outside. I knew it was going to be much easier to run in compared with last weeks 92° weather. Arriving at the track, I talked with coach and she mentioned that the dew point was 54° which meant that it was perfect running weather. And it meant that we’d be running 400m sprints. For some individuals 400m sprints (1/4 mile) are chump change. Not for this girl. I was very nervous to do so many.

After the first, bent over and out of breath, I declared that I wouldn’t be able to maintain that speed for five more repetitions. Of course the other folks (all much faster) told me to stop being a naysayer and to give it a shot. So I did. And it hurt. The next 400m I thought I had slowed down immensely. As I neared the finish line I heard coach screaming out the time. Wait, I’m going faster? That didn’t seem logical. Yet somehow I finished four seconds faster on the second lap.

The rest followed the same pattern. All seven sprints were faster than I had expected to run and the last six were all seconds faster than the first. I have no idea how I pulled out the strength to do it, but man it felt good! (After I caught my breath…) I’m still on a runners high!

Also, I’ve decided to register for Karen and Richard’s Really Big Free Marathon. I just heard about it, but any excuse to go to Vegas for the weekend is a good one. And, better yet, the race is free! So who is with me? I know plenty of you can conquer a half marathon, come join me! Melissa, I’m looking at you. You may not know it yet, but you may get dragged into doing this with me.  :)

Tell me about your recent accomplishments this week. When have you pushed your body farther than you thought it could go?

I find that I have a personal barometer that I measure and alter my emotions by. My weight. I realized it this morning as I shied away from the scale. I haven’t stepped on the scale in the past two weeks due to vacations and poor eating, I didn’t know what to expect.

Now, I’m well aware that the number on the scale should not affect me. It doesn’t own me, I am (or think I am) at all times in power of my body. Yet why the fear this morning? Well, I haven’t worked out as much, I ate more decadent meals, and I lost too much sleep. So what was I to do? I knew I needed a base on where my weight was after two weeks of gluttony, so I sucked it up (and in) and got on that scale.

What did it tell me? Well, somehow I’ve managed to maintain/drop a teensy bit of weight. I don’t know how it happened, but I found myself immediately cheerful. Something about that darn scale gets to me. Every. Damn. Time. I don’t have a pair of skinny jeans, I don’t keep body measurements of my progress, I just base my body on that single number. Somehow seeing that I haven’t deviated off my downward path was able to improve my mood immediately.

I’ve learned to become less upset about small fluctuations upward, but that lower number? Heaven. Maybe I’m learning to eat and live at a balance. Perhaps my body is plateauing again (it sure likes to do that). Whatever it is, I’m glad that I’m managing to maintain a healthier lifestyle. Hopefully my barometer will never exceed that previous tens digit (not sure I’m ready to admit it). And if it ever dare, hopefully I have the strength and determination to weasel my way back down.

What about you? Do you have a personal barometer? Does any physical factor make or break your mood?

I stepped on the scale this morning and saw that I am currently at the lowest weight I’ve been in six years.  Six years!  It was monumental, I did a little dance. The only time I was much below this was the month my parents spent in Australia. I was on a strict diet of teddy grahams and cookie dough. I dropped ten pounds that month, it was great. And then, of course, I gained it back in a few months time. What a glorious way to start the day, right?

Well, it also happens to be my good friend Stephanie’s last day in the office.  This means a “quitter’s buffet”. In my office, it is typically the duty of the person leaving to bring in a baked good. Well today, I chose to celebrate my wonderful friend and brought in delicious chocolate mouse cake. Another friend made his famous homemade fudge. Stephanie brought in Krispy Kreme donuts. And her  kind boss brought a few dozen donuts from another bakery.

I have yet to consume any of this overabundant sugar fest, but it is getting quite tough to refrain.  On my desk sits a small piece of cake and a small piece of fudge. It is staring at me.  Thank goodness self control is stopping me from even considering the donuts.  We’ll see how long I can hold off on the cake and fudge. Wish me luck.

What about you:  What sweet or salty treat makes your resolution waiver? How do you say “heck no” to delicious treats that are within arm’s reach?

Posted in The Future

For a period in my life I avoided the scale like it was my job.  Weigh myself?  No way! Where is the fun in knowing how big I am? Yet, as of late, I find myself weighing in on a daily basis.  I’ve even graphed it!* (Nerd alert.)

Now I’ve heard the pros and cons of weighing yourself daily.  Most of the advice I’ve gotten in the past tells me to weigh in weekly so I don’t get upset about fluctuation.  But I find that, at a weekly weigh-in, I don’t hold myself as accountable for my mediocre eating and exercising of the previous week. On a day to day basis I can look at the scale and see how I’ve been treating myself.  Yes, my weight was up two pounds the other day, but I was able to calm my (somewhat irrational) nerves. I reminded myself that I had lifted weights vigorously the day before and my body was compensating.  It probably didn’t hurt that I used a more positive thinking strategy.  And of course it was back down the next day, so any negative thoughts could have thrown me off my trending.

So here is my issue.  I get to look at my scale on a daily basis, which is fantastic, as long as I keep myself honest to my body and self.  I’m looking for others to help keep me accountable, to ask me how I’m doing every once in a while.  I may not throw a number in your direction, but every nudge is a kind reminder that this is a journey I wanted to embark on.

I wanna know: How frequently do you weigh yourself and why?  Where do your theories come from and how do you keep yourself accountable?

*There is a chance this graph will be made viewable in the coming weeks, when I figure out to embed and update it…

On a funny note, my P90X DVD refused to function properly at 5am this morning and I was devastated.  Cleaned it off at work and I’m hoping I can fit it in this afternoon (which just might make my day).
Update: My DVD still didn’t work.  Thank goodness there was a Russian website that allowed me to stream it…

What I wouldn’t do…

How many times have you said, “I’d kill for…”?  I came across this postcard from PostSecret this week and it struck a chord.  I find myself agreeing with this individual, what wouldn’t I give to have the perfect body I’ve always wanted.  I’ve tried to eat differently, increase my exercise, think more positively, but nothing has managed to work as of yet. 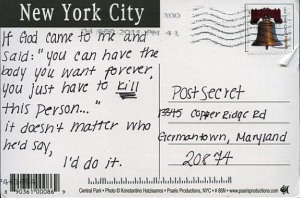 Fortunately (or maybe unfortunately?) I will never have to face a decision as drastic as the one denoted in the postcard.  There is still hope for my body the natural way, seeing as that is my only real option (no more plastic surgery for me). Here is to trying to be more positive!

In other news, the scale showed a tens-digit I haven’t seen in a while this morning. Starting off the day in a good mood (there was dancing in the shower).  Hopefully my yearly review doesn’t shatter that this afternoon…

Tell me: What are your small victories of the day?