Never give up, never give in!

Back in July I (naively) registered for the Oakland Half Marathon. The San Francisco Marathon had a fantastic special going and I couldn’t say no (I’m a pushover and cheap). I almost forgot about this race up until two weeks ago when I started talking to Maggie about logistics. And I’ll be quite serious, I didn’t train properly. The longest run I had done prior to the half was 8 miles at a decent, but not optimal, pace.

Then last weekend the day had come and I readied myself (as much as I could). Maggie, her boy, and I went out for a serious carbo loading session before hopping into bed early. On Sunday we rose a bit late and sauntered over to the start line (a 1.5 mile walk away). We showed up just in time to make good use of the porta-potties and get into the corrals. I decided to stick with Maggie for the first few miles and maintain a steady, smart pace. My initial goal was to go slowly for the first four miles, take it up a bit for the next four, and then go even quicker for the last. Although I also recognized that my goals were a bit lofty and I wasn’t exactly prepared… 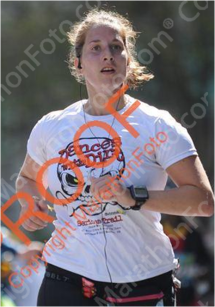 After two and a half miles Maggie she shooed me off to pick up my pace. I’m so grateful that she kept me consistent for the start. By avoiding my tendency to go out of the gate fast I was more energetic for the rest of the race.  It was around this point I found a mother, father, and daughter that were running together (this is why I need to date a runner). I kept my eyes on the family unit and let them set the pace. My favorite race tip – find someone who is going your speed and make friends (or just awkwardly follow them).

We were going at a pretty steady speed, one a bit faster than I had hoped for in the middle miles. By mile 8 I realized that I was keeping a pace faster than my PR. My body was feeling good and my mind was focused. I knew that I needed to keep it up to set a new record, and that was something I desperately wanted. I pushed on, following the cute little group.

Then mile 10.5 hit and I wanted to pull back. I was feeling a tinge of pain in my knees and out of breath. But at the same time I realized that slowing down meant I would give up everything I had worked hard for. It would mean giving up my PR. That wasn’t something I was interested in. I wouldn’t let that be an option. I put my head down and put my everything into those last few miles.

I thought of how great it would feel to see a new, lower number on my Garmin. I thought about how much I’d wanted this for the past few years. I thought of all the chocolate milk I would drink afterward as a reward. I used every trick in the book to make sure my mind stayed positive and focused on continuing hard.

I can’t deny that it was tough and took most of what I had, especially up the damned hill they put in the last stretch. In races past I would sprint the last tenth of a mile, but this time I didn’t have the energy to pick up the pace to a sprint. It was a great feeling to know that I gave it my all.

In the end I couldn’t be happier with how I did.  Looking over the data I found out that I took four minutes off of my previous record!! This deviates a bit from my chip times since, according to my Garmin, I completed 13.3 miles over the course. Either way it is a new personal record and that gave me a great runners high. Now I’m stuck imagining how I could have done if I’d trained properly. I’m definitely looking forward to doing even better in June at my next race.   :)

What are your thoughts on finding a pace rabbit? How do you react when you are feeling beaten in a race?