Down in the Big Easy

This past weekend I spent a few days in New Orleans with some great family friends and my two best friends. It was seriously amazing. I’ve been to New Orleans several times in the past, but I can never get enough of the place. This time of year the weather is perfect, the crawfish are in season, and everyone is a bit too friendly.

We started off the weekend the right way, with drive thru daiquiris, face painting, and a parade. Who knew that New Orleans was so into St. Patrick’s day? It was a rather tame night (I needed my rest), but we tasted some delicious seafood, imbibed a few beers, and got into the N’awlins spirit.

The next day we started off late, as my friends like their sleep, and had a full southern breakfast. Dear goodness I could get used to grits topped with an egg and sprinkled with bacon. Of course our host, Glenn, wouldn’t allow us to leave the house without sampling some crawfish. Breakfast dessert? I don’t see why not! We taught Anastasia how to crack ’em open and downed a few pounds before leaving the house.

Our first parade consisted of hundreds of drunkards throwing random items at us. And then there were the lengths of men that gave out flowers with a kiss. At first I didn’t understand the concept, but then we got into it. By the end I had a full bouquet, several new garters, and even a few dollars that were slid into them. Twas quite amusing, but we were starting to get restless and decided to go into the French Quarter.

The evening began with one of the best restaurants in the city, Jacques Imo’s, with some of A’s friends. If you are ever in the area, I suggest checking it out. We were stuffed and oh-so-pleased by the time we left. That night was a mixture of people watching (what else is Bourbon Street for?), great jazz, and some late night munchies. We left the city at 3am (the latest I’ve been up in a while) and were all ready for a rest.

Sunday brought yet another parade. We didn’t spend much time watching as there was no need for beads, but we did devour a few too many pounds of crawfish. They had a forty pound pot going when we arrived. I’d estimate that the three of us consumed at least ten pounds (if not more). It was so spicy that I was constantly wiping my brow, yet that wasn’t enough to keep me away. I don’t know how I lived my life so long without a proper crawfish boil. 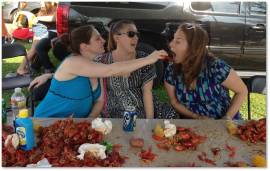 We wound up in the French Quarter yet again that night. Had a few drinks at Pat O’Brien’s, a New Orleans staple, before getting the courage to sing karaoke. Right as we stepped on stage, Kenlie walked in to support us. It was great to hang out with her all night. We hopped from one bar to the next, which isn’t tough as they are right on top of each other, and danced our faces off along the way. 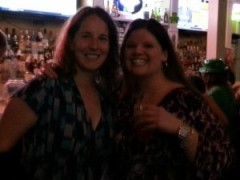 It was a weekend I won’t soon forget. In fact, I’m currently detoxing from all of the amazing eats I had. (It is a rule that you have to try all the delicious food while you are there!) Was great in the moment, but I need to get it out of my system and get back on track. If you haven’t been, I demand that you put it on your list. There are few US cities I would urge you to visit and New Orleans is in the top five.

Have you been to New Orleans? What would you do if you went?